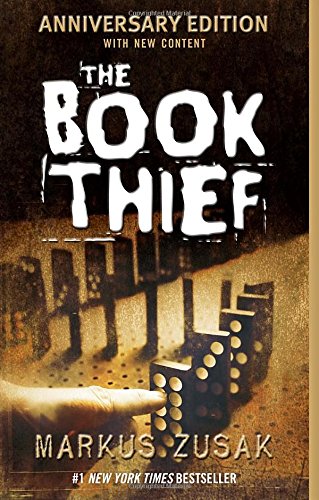 At the moment, I’m deep into reading The Book Thief, by Markus Zusak. I’ve started it yesterday and cannot put it down. I’ve done myself a great disservice avoiding it just because it’s popular and because it’s about Nazi Germany at the height of the Holocaust. What book could possibly do what Diary of Anne Frank and the Schindler’s List didn’t already? thought I.

Fool, I am. Thank God for ebooks and libraries that loan them.

Overdrive — and all the public libraries that cooperate with the company — thank you.

As of this writing, I’m about one-third’s into the story. I’ve learned why the narrator, Death, calls the main character, Liesel, the book thief. It has to do with her little brother Werner’s death.

The descriptions of how she is raised by her foster parents, Hans and Rosa Hubermann, after her mother gives her up in Munich, are haunting. Just reading about the way she clung to the metal gates of her new foster home the first day there, confused and inconsolable, made my heart ache.

Liesel seeing a library for the first time, when she visits the Mayor’s wife to collect her laundry, made me hold my breath for a beat. So many books! Running fingers over the spines. Just staring at the books after going back. Then getting bolder and starting to read the books, many at the same time, for forty minutes, lying on the floor. Liesel’s halting and stuttering to the mayor’s wife: “I forgot … I mean, I just … wanted to … thank you.”

Liesel and Rudy, (Liesel’s best friend), both sucking on a single piece of hard candy, bought with a penny they’d picked up from the gutter, ten times each, is equal parts funny and bittersweet.

I don’t think the words Saukerl (male pig) and Saumensch (female pig), will ever be the same to me after this.  Especially if spoken by eleven-year-olds.

I’m not one to ponder themes and delicate literary nuances out loud. Instead, I picture Captian America reading The Book Thief and crying over it in the dark. (Like so many captured by Captain America, I can write about Steve Rogers in the twenty-first century for hours.) The mixed candy scene and Liesel’s epic schoolyard fight might trigger a sad smile. Most certainly, I can picture Steve crying over how Erik Vandenburg, a German Jew, saved Hans, in WWI (the Great War). How that led Hans to make and keep a promise he made to Erik’s widow, “If you need anything…”

Hans is a good man. So is his wife Rosa, for all her harsh words and strict ways and penchant for complaining. The complex textures of the characters feel like scarred hands, caressing a worn wool coat from a bygone era. As one can expect from a story narrated by Death,  death makes its presence and work known throughout. There’s no shock of character death. It’s omnipresent and it shadows them all like a dagger glinting in the dark, aiming at a throat.

In short: a beautiful book, so far, and I expect to shed a few tears.

I read a lot. Before I rediscovered libraries, I used to spend upwards $200 – $300 a month on books. Here is a selection of books I’ve enjoyed. (If you purchase anything through these links, Read more…

If you heard a high-pitched screech echoing from a distance that sounded like “WHAAAA!?” that was me after I finished reading ‘Spirit Dance’. I found Mr. Douglas Smith via the first book promotion I’ve ever Read more…

NaNoWriMo Week One, and Books on my Desk