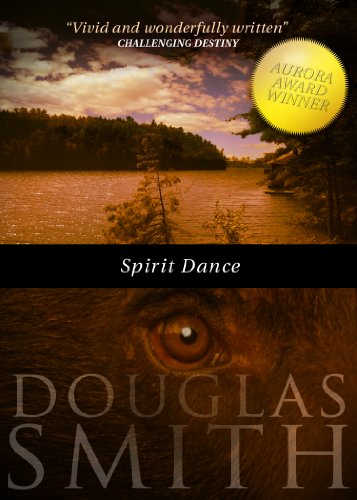 If you heard a high-pitched screech echoing from a distance that sounded like “WHAAAA!?” that was me after I finished reading ‘Spirit Dance’.

I found Mr. Douglas Smith via the first book promotion I’ve ever done back in April, and I’ve since been going through his happily large back catalog.  I knew I was in a for a good yarn when I reached the 10% point of Spirit Dance.

It’s terribly difficult to write a review on a novelette without giving away the whole thing, but I’ll do my best:

If a remote Canadian wilderness in autumn could become a living, breathing tale, “Spirit Dance” would be it. Starting with a quiet introduction inside a store, the story gently leads you into a world that has a small, special group of people who are gifted with the ability to shift into a species of animal and command them. “Heroka”, they are called. They are pitted against those who destroy the nature these animals call home: loggers, government agencies, the works. The main character must prevent an old friend from seeking revenge after a truck runs over their fellow Heroka, killing four.

I was so engrossed by the time I read the big confrontation, I forgot “Spirit Dance” was a novelette. When I reached the end, I let out the aforementioned screech: WHHHHAAATTT?! WHERE IS THE REST I WANT THE REST WHY ISN’T THIS A FULL LENGTH NOVEL WHY

Doug has published a novel set 5 years after the events in “Spirit Dance” and, needless to say, I’m going to read that one very soon.

I still wish Spirit Dance was a novel. 🙁

I read a lot. Before I rediscovered libraries, I used to spend upwards $200 – $300 a month on books. Here is a selection of books I’ve enjoyed. (If you purchase anything through these links, Read more…

NaNoWriMo Week One, and Books on my Desk

What I’m reading now: The Snowman

I’ve been meaning to write another “What I’m Reading Now” post. I have a book I can’t wait to share with you all… The Snowman by Jo Nesbø I’ve heard of Jo Nesbø and noted Read more…